As 2019 has reached its equator, we review how the US automotive industry is doing so far. Below we have listed 10 best selling sedans, trucks, and SUVs of the first half of 2019 with comparison to 2018 sales figures and the percent of year-to-year change.

The big winner of the first two quarters remains the same as at the beginning of 2019, but there has been some rearrangement among the runners-up.

Ram Pickup sales have made a noticeable 28-percent jump compared to the same time in 2018 outselling Silverado that experiences a 12-percent sales drop and is slipping into the third place. As Chevrolet is in the middle of launching the regular cab version of the light-duty Silverado, they expect to get back their silver medal, once it hits dealer showrooms.

Toyota RAV4 was named the best-selling non-truck vehicle of 2018 and it seems they can get this badge for the second year in a row.

Honda’s sales are slightly down compared to the same time in 2018.

Except for 2001, the Camry was the best-selling passenger car from 1997 to 2018. So far, their sales have insignificantly dropped, but they have almost 6 months ahead to recover.

Despite sales slump of almost 19 percent, the Rouge has made it to the 7th place in top 10 reminding us that it was the favorite Nissan in the US in 2018. Keep in mind that Nissan lists the Rogue and Rogue Sport under the same figures in their reports.

Chevrolet Equinox is enjoying an almost 12% increase in sales compared to the first half of 2018. It may be because starting 2019, they offer three new option packages within the Equinox lineup.

The Civic and Corolla round out the top ten with an approximately equal drop in sales. Both manufacturers are trying hard to cater to car buyers by redesigning their models for 2019 but so far they haven’t impressed the audience that much.

Stay tuned to our blog for more US automotive industry statistics. 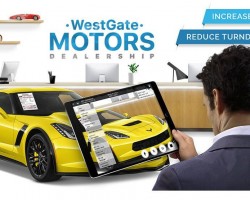 Helping Auto Dealers To Decide on Their Next Move 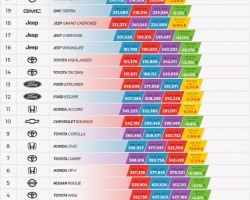 The 20 Best Selling Cars and Trucks in the U.S.A. Year-over-Year Comparisons 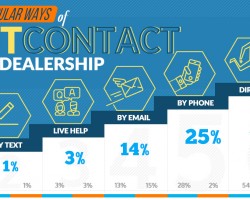 The Most Popular Ways of First Contact With a Dealership 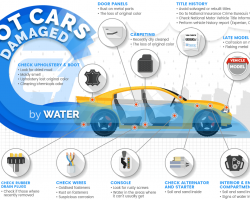